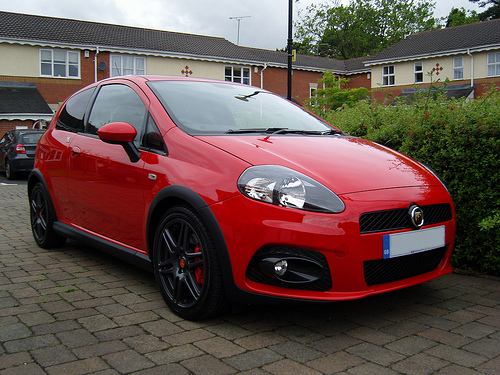 The Fiat Grande Punto is a supermini car produced by the Italian manufacturer Fiat since 2005. It is the third generation in the Fiat Punto series and was announced in August 2005, and launched at the Frankfurt Motor Show. In 2009, it was joined by the facelifted Punto Evo. In 2012, both were replaced by a revised model, called simply Punto, thus resurrecting the model name of its predecessor. It is manufactured in Italy, in Brazil (from 2007) and in India (from 2008). The Abarth Grande Punto is available in three versions - the 1.4 T-Jet and two further upgrades promising even more driver involvement. The first tuning kit, known as Assetto, is designed to enhance the chassis of the car, including the brakes and suspension. The kit includes ventilated and cross-drilled front brake discs, cross-drilled rear discs, high performance (softer) front brake pads, special shorter springs and 18-inch white painted alloy wheels fitted with Pirelli P Zero tyres.

We'll send you a quick email when a new Abarth Grande Punto document is added.

Yes! I'd love to be emailed when a new, high quality document is available for my Abarth Grande Punto. My email address is: