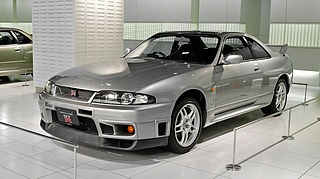 The Nissan Skyline is a line of compact cars, sports cars and compact executive cars originally produced by the Prince Motor Company starting in 1955, and then by Nissan after the two companies merged in 1966. The R32 Skyline debuted in May 1989. It was available as either a 2-door coupe or 4-door hardtop sedan, all other bodystyles were dropped. The R32 featured several versions of the RB-series straight-6 engines. The 2.5-litre GTS-25 became one of the first Japanese production cars to feature a 5-speed automatic transmission.

We'll send you a quick email when a new Audi 50 document is added.

Yes! I'd love to be emailed when a new, high quality document is available for my Audi 50. My email address is: