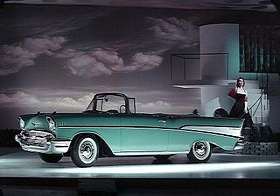 The Chevrolet Bel Air was a full-size automobile that was produced by Chevrolet for the 1950–1981 model years. Initially only the two door Hardtops in the Chevrolet model range were designated with the Bel Air name from 1950 to 1952, as distinct from the Styleline and Fleetline models for the remainder of the range. The Bel Air continued with various other trim level designations until US production ceased in 1975, production continued in Canada for its home market only through the 1981 model year. In 2002, a concept Bel Air convertible was shown at the North American International Auto Show. It features a few styling and design cues from the best remembered tri-five (1955–57) models, such as the chrome windshield frame, traffic light viewfinder, and a gas filler cap behind the tail light, similar to 1956–1957 Chevy's gas cap behind the chrome trim on the back of the tail fin, but more reminiscent of the 1948–1958 Cadillac gas cap tail light. It also features the same body on frame hydroforming technology (used in the frame rails of the Corvette and GM’s midsize sport-utility vehicles) and a sheet metal body, on a 111 in (2,800 mm) wheelbase, and a 65 in (1,700 mm) track. A virtual "turbo boost" button on the steering wheel activates the powertrain control module to trigger a more aggressive spark and fueling calibration for maximum horsepower. It also led the 13th Annual Stater Brothers Route 66 Rendezvous as the official vehicle in September 2002. General Motors has shown no interest in producing the car.

We'll send you a quick email when a new Chevrolet Bel Air document is added.

Yes! I'd love to be emailed when a new, high quality document is available for my Chevrolet Bel Air. My email address is: