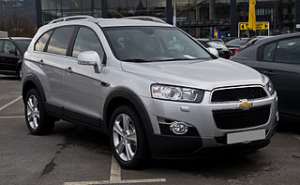 The Chevrolet Captiva Sport is a compact SUV that was developed by Daewoo, and has been sold by Chevrolet in the Americas since 2006. The Captiva utilises the GM Theta platform and derives from the Chevrolet S3X concept car revealed in 2004. The Theta platform also underpins the Opel Antara, the Captiva's mechanical derivative also built by Daewoo. Sold internationally as the "Chevrolet Captiva", South Korean-market cars were badged Daewoo Winstorm up until 2011, when the international name was adopted. Australasian-specification models are badged Holden Captiva. The Captiva is powered by the Australian (Holden)-built 3.2 litre Alloytec V6 engine mated to a five-speed automatic transmission, featuring Active Select. This engine is also shared by the Captiva's Opel Antara derivative which utilises a different design, but shares the same underpinnings and powertrain components.A four-cylinder VCDi common rail turbodiesel engine, co-developed with VM Motori was introduced into the range.

We'll send you a quick email when a new Chevrolet Captiva Sport document is added.

Yes! I'd love to be emailed when a new, high quality document is available for my Chevrolet Captiva Sport. My email address is: