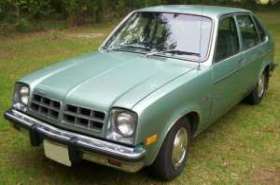 The Chevrolet Chevette is a front-engine/rear drive subcompact manufactured and marketed by Chevrolet for model years 1976-1987 in three-door and five-door hatchback body styles. Introduced in September 1975, the Chevette superseded the Vega as Chevrolet's entry-level subcompact and sold 2.8 million units over twelve model years.[1] and joined the Vega's reworked model called the Chevrolet Monza. The Chevette was the best-selling small car in the U.S. for model years 1979 and 1980.The Chevette was one of GM's T-cars, those employing General Motors' global T platform. GM manufactured and marketed more than 7 million[1] rebadged variants on the T platform worldwide, including the Pontiac Acadian in Canada, Pontiac T1000/1000 in the United States (1981-1987), K-180 in Argentina, Vauxhall Chevette, Opel Kadett, Isuzu Gemini, Holden Gemini and, as a coupe utility (pickup), the Chevy 500. A T-car variant remained in production in South America through 1998.

We'll send you a quick email when a new Chevrolet Chevette document is added.

Yes! I'd love to be emailed when a new, high quality document is available for my Chevrolet Chevette. My email address is: