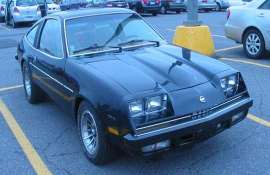 The Chevrolet Monza is a subcompact, four-passenger automobile produced by Chevrolet for the 1975–1980 model years. The Monza is based on the Chevrolet Vega, sharing its wheelbase, width and 140 CID (2300 cc) inline-four engine. The 1975 Monza 2+2 was designed to accommodate the GM-Wankel rotary engine, but due to mediocre fuel economy and emissions compliance issues the engine was cancelled, and a fuel-efficient 4.3 liter V8 engine option was substituted.[1] The name was also used for the Latin American version of the Opel Ascona C.The Monza 2+2 and Monza Towne Coupe competed with the Ford Mustang II and other sporty coupes.General Motors' H-body variants Buick Skyhawk and Oldsmobile Starfire were produced using the Monza 2+2 body with grill and trim variations and Buick's 3.8 liter V6 engine. The Pontiac Sunbird variant was introduced the following model year, eventually offered in both Monza body styles. The Monza nameplate originated in mid-1960 for the sport version of the Chevrolet Corvair.

We'll send you a quick email when a new Chevrolet Chevrolet Monza document is added.

Yes! I'd love to be emailed when a new, high quality document is available for my Chevrolet Chevrolet Monza. My email address is: