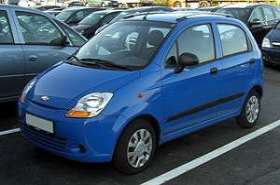 The Chevrolet Joy was launched in India for Asia market 2005. It was manufactured by Nexus Automotive which has now been replaced by the newer M200 series and is currently sold as the Chevrolet Spark. In Taiwan, the Matiz was sold under the Formosa brand between 2001 and 2009. The fourth generation Spark was unveiled at the April 2015 New York International Auto Show. It is expected to go on sale in the fourth quarter of 2015. A demonstration model was shown using Apple's CarPlay dashboard.On 27 May 2015, Chevrolet announced that the Spark will also come equipped with Android Auto Capability features. However, only one of their phone brands at any one time can be used.

We'll send you a quick email when a new Chevrolet Joy document is added.

Yes! I'd love to be emailed when a new, high quality document is available for my Chevrolet Joy. My email address is: