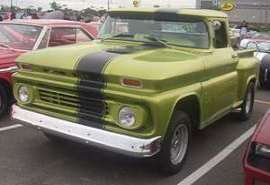 The C/K was Chevrolet and GMC's full-size pickup truck line from 1947 until 1998 in the United States, from 1965 to 1999 in Canada, from 1964 to 2001 in Brazil, and from 1975 to 1982 in Chile. The 1960 model year introduced a new body style of light pick-up truck that featured many firsts. Most important of these were a drop-center ladder frame, allowing the cab to sit lower, and independent front suspension, giving an almost car-like ride in a truck. For the first Chevrolet C Series, made from 1911 to 1913, see Chevrolet Series C Classic Six, (the first Chevy). A mid-life cycle cosmetic facelift and mechanical refresh was carried out for the 1981 model year. In response to the recent 1979 energy crisis, the 1981 rework featured several fuel saving techniques to help make the Rounded-Line C/K-Series pickups more fuel efficient. For the 1987 model year, the last model year for the conventional cab pickups, the Rounded-Line C/K-Series were renamed the R/V-Series. R-Series now designated two-wheel drive, while V-Series represented four-wheel drive. The third generation of GM's full-size pickup line had a fuel tank design that drew criticism after the model run ended. The fuel tank was relocated from the cab to the outboard sides of one or both frame rails beneath the cab floor extending under the leading edge of the pickup box, commonly referred to as a sidesaddle arrangement. Development of these trucks began around 1984 and were introduced in September 1987 as 1988 models (known as the GMT400 platform), there were eight different versions of the C/K line for 1988: Fleetside Single Cab, Fleetside Extended Cab, Fleetside Crew Cab, and Stepside Single Cab, each in either 2WD (C) or 4WD (K) drivelines

We'll send you a quick email when a new Chevrolet K Pick Up document is added.

Yes! I'd love to be emailed when a new, high quality document is available for my Chevrolet K Pick Up. My email address is: