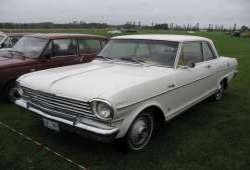 The Chevrolet Chevy II/Nova is a compact automobile manufactured by Chevrolet, and produced in five generations for the 1962 through 1979, and 1985 through 1988 model years. Nova was the top model in the Chevy II lineup through 1968. The Chevy II nameplate was dropped, Nova becoming the nameplate for the 1969 through 1979 models. Built on the X-body platform, the Nova was replaced by the 1980 Chevrolet Citation introduced in the spring of 1979. The Nova nameplate returned in 1985, produced through 1988 as a NUMMI manufactured, subcompact based on the front wheel drive, Japan home-based Toyota Sprinter.

We'll send you a quick email when a new Chevrolet Nova document is added.

Yes! I'd love to be emailed when a new, high quality document is available for my Chevrolet Nova. My email address is: