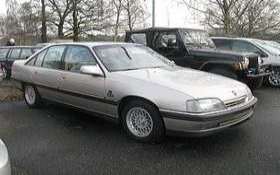 The Chevrolet Omega is an executive car sold by Chevrolet for the Brazilian market. Replacing the Chevrolet Opala, which was a development of the Opel Rekord C, the original Chevrolet Omega was based on the Opel Omega A, and built locally between 1992 and 1998. After 1999, local production ceased, and General Motors do Brasil imported badge engineered versions of the Holden Commodore from Australia. ased on the Opel Omega A, the Chevrolet Omega A debuted in Brazil in 1992 with a choice of two engines—a 2.0-liter four-cylinder (GLS and GL trim) and 3.0-liter six-cylinder (CD trim). From 1995, following the discontinuation of Omega A in Germany, the engines were upgraded to a 2.2-liter four (GLS) and a 4.1 L (250 cu in) Chevrolet straight-six engine (CD) as used in the previous GM Opala albeit tuned by Lotus and with electronic multiport fuel injection added.

We'll send you a quick email when a new Chevrolet Omega document is added.

Yes! I'd love to be emailed when a new, high quality document is available for my Chevrolet Omega. My email address is: