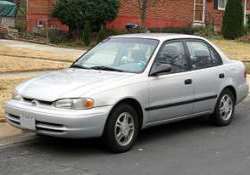 The Chevrolet Prizm was introduced in February 1989 for GM's then-new Geo brand of import cars, for the 1990 model year. The hatchback version sold through 1991 was a rebadged version of the Toyota Sprinter Cielo, although unlike the Sprinter (and Corolla Liftback) it received the same front clip as the sedan. The sporty GSi model of 1990–1992 was notable for its 130 hp (97 kW) twin-cam engine, sport suspension, disc brakes, and 14 inch wheels, a successor to the 1988 Nova Twin Cam but less of a limited edition, available in both body styles and a full array of colors in contrast to the earlier model's black sedan only. The regular engine offered 102 hp (76 kW). In addition to the base and the GSi, there was also a better equipped LSi model. In addition to more equipment, the LSi also received body colored bumpers.In 1991, the lettering of the car's name was changed from "Prizm" to "PRIZM" in italicized and capital letters (although the steering wheel continued to use "Prizm"), and the B-pillar and door frames on base models are now body-colored instead of black. The Prizm was not sold In Canada, with GM offering a sedan version of the Geo Metro instead. The Geo Metro sedan was not available in the United States until 1995.

We'll send you a quick email when a new Chevrolet Prizm document is added.

Yes! I'd love to be emailed when a new, high quality document is available for my Chevrolet Prizm. My email address is: