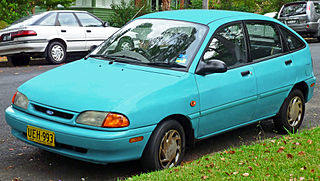 The Ford Aspire was sold in North America from 1994 to 1997. It was the replacement for the Ford Festiva. It was the first car in its class to have dual airbags standard and antilock brakes optional. It came in two and four door body styles, both hatchbacks. The two door was available in base and SE trim while the four door was only available in base trim. The SE model offered a sporting package that consisted of fog lights, rear spoiler, alloy wheels, blue face instrument cluster with tachometer, and upgraded interior trim. The Aspire had very few options for the base model: cassette player, automatic transmission, rear defrost and wiper, alloy wheels, and a comfort and convenience package that had several minor interior upgrades. Due to slow sales the SE model was dropped after 1995 along with all of its optional equipment. The base model also lost its optional alloy wheels and rear wiper, making the Aspire a true "stripper" of a car. The performance with the 5-speed was acceptable but the automatic was slower with 0–60 times at 16.2 seconds. Power steering was only available with the 5-door automatic. The Aspire was given a facelift in 1997 with redesigned front and rear bumpers, a new radio, and new seat facings. In August 1997, Ford announced the Aspire would be discontinued due to slow sales. The last one rolled off the assembly line on September 26, 1997.

We'll send you a quick email when a new Ford Aspire document is added.

Yes! I'd love to be emailed when a new, high quality document is available for my Ford Aspire. My email address is: