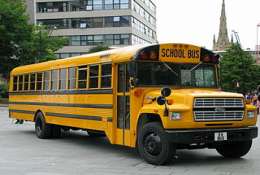 The Ford B-Series is a bus chassis that was manufactured by Ford Motor Company from 1948 to 1998. Derived from the medium-duty variants of the Ford F-Series, the B-Series were produced as a cowled chassis; the design was a bare chassis aft of the firewall. While primarily used for school bus applications in the United States and Canada, the chassis was exported worldwide for to construct a wide variety of bus bodies. Prior to 1969, Lincoln-Mercury dealers in Canada marketed the B-Series as part of the Mercury M-Series truck line. At the time, rural communities in Canada were serviced by either the Ford or the Lincoln-Mercury dealer network, but not both networks concurrently. As part of the late 1996 sale of the Louisville/AeroMax heavy-truck line to Freightliner, the medium-duty F-Series and B-Series were phased out of production following the 1998 model year. While Ford would re-enter the medium-duty segment with the F-650/F-750 Super Duty for 2000, as of 2016, it has not produced another cowled bus chassis. Currently, Ford bus production is concentrated on cutaway chassis vehicles. In the cowled-chassis segment, the role and market share of the Ford B-Series was largely superseded by the Freightliner FS-65, introduced in late 1997.

We'll send you a quick email when a new Ford B Series document is added.

Yes! I'd love to be emailed when a new, high quality document is available for my Ford B Series. My email address is: