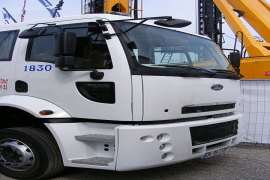 The Ford Cargo is a forward control (cab-over-engine) truck model that is manufactured by Ford. Originally launched in 1981 by Ford UK, it is now built in Brazil and Turkey with the latest generation of the Cargo launched in 2012. With Ford's sale of its commercial vehicle division to Iveco in 1986, the Cargo was sold in Europe under the Iveco Ford name until 1993, when the Cargo was updated and became the Iveco Eurocargo. The Cargo was styled by Patrick Le Quément who included windows which extended down to floor level in the doors to enable drivers to see pathways in urban locations more easily when parking. It was originally only built in Ford's Langley (Slough) plant, from which about a third of the production was exported to continental Europe. Cargos were also exported to Turkey and to Australia, while panels were supplied to Brazil for local assembly (these Brazilian trucks were also exported to the United States). Production has expanded since: the model is still made by Brazilian, Argentinian and Venezuelan (also known as the Ford Trader) Ford subsidiaries, Turkey's Ford Otosan, and India's Ashok Leyland (as the eComet and as the Stallion). It was also made by Freightliner Trucks and sold as the Sterling Cargo or the Freightliner Cargo in the United States before production ended and Sterling was shut down. Ford then sold the Ford LCF as a smaller cab-over alternative in the US to be more competitive with similar trucks, such as the Mitsubishi Fuso Canter and Isuzu Elf (N Series), but with poor sales.

We'll send you a quick email when a new Ford Cargo document is added.

Yes! I'd love to be emailed when a new, high quality document is available for my Ford Cargo. My email address is: