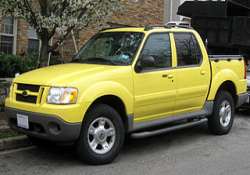 The Ford Explorer Sport Trac, sometimes referred to as simply the Ford Sport Trac, is a mid-size sport utility truck (SUT) sold mostly in North America produced by Ford from 2000 through 2010. The Sport Trac was based on the Ford Explorer SUV - not based on the compact Ford Ranger (North America) - because it was introduced when the Explorer and Ranger platforms diverged (Explorer's chassis was a heavy duty variant of the Ranger's). The Sport Trac fell between the Ranger and Ford F-Series in Ford's truck lineup, based on capability and price. It competed with other mid-size SUTs, trucks and SUVs, such as the mid-size Honda Ridgeline SUT and even the larger full-size Chevrolet Avalanche SUT. During its first year on sale in the U.S., there was a waiting list of over 3 months. It was technically the first body-on-frame sport utility truck. The Sport Trac was a Class 2 vehicle with a GVWR of 6250 lbs. and a maximum GCWR of 12,000 lbs. This made it one of the more and the then most capable mid-size pickups, having a greater GVWR and GCWR than the Dodge Dakota, GM's GMC Canyon/Chevrolet Colorado pickups and Toyota Tacoma.[citation needed] The Sport Trac was discontinued in October 2010, even though it was announced in earlier press releases that production would end in 2011, since the 2011 unibody-Ford Explorer was introduced in December 2010. The Sport Trac was sold through the 2011 calendar year as a 2010 model.

We'll send you a quick email when a new Ford Explorer Sport Trac document is added.

Yes! I'd love to be emailed when a new, high quality document is available for my Ford Explorer Sport Trac. My email address is: