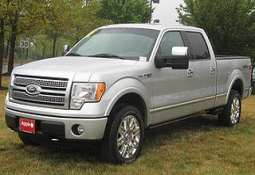 The Ford F-Series is a series of full-size pickup trucks from Ford which has been sold continuously since 1948. The most popular variant of the F-Series is the F-150. It has been the best-selling vehicle in the United States for the past 32 years, and the best-selling pickup for 43 years, and the best selling vehicle in Canada. In the tenth generation of the F-series, the F-250 and F-350 changed body style in 1998 and joined the Super Duty series. During the post-World War II era, smaller Canadian towns had access to either a Ford dealer or a Lincoln-Mercury-Meteor dealer, but not both; a Mercury-badged version was sold at Lincoln-Mercury-Meteor dealers there from 1946 to 1968. Other than the grilles, trim, and badging, these pickups are identical to their Ford counterparts.

We'll send you a quick email when a new Ford F Series document is added.

Yes! I'd love to be emailed when a new, high quality document is available for my Ford F Series. My email address is: