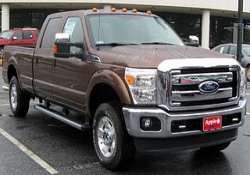 The Ford Super Duty is a line of trucks (over 8,500 lb (3,900 kg) GVWR) that were launched by Ford in early 1998 for the 1999 model year. The F-250 to F-550 Super Duties are assembled at the Kentucky Truck Plant in Louisville, Kentucky. The F-650 and F-750 Super Duties were assembled at the Blue Diamond Truck plant in Mexico prior to 2014, when production was shifted to Avon Lake, Ohio.The Super Duty trucks are larger, heavier built series pickup trucks with heavier-duty body-on-frame steel ladder frames, axles, springs, brakes, transmissions, more powerful engines, and all other heavier/bigger components (with much higher payload and towing capacities) than the older traditional equivalent F-250, F-250HD (Heavy Duty), and F-350 Ford truck lines (where from 1987 to 1997 the F-250, F250HD, F-350, and F-Super Duty were all chassis cab models only). The two-wheel-drive and four-wheel-drive model frames are the same in the F-250 and F-350 series, making conversion from a two-wheel-drive model to a four-wheel-drive model less difficult than in other truck models. F-350 chassis cab, F-450 and F-550 frames and suspension are the same between the two-wheel-drive and four-wheel-drive models. The trucks were once under investigation by the National Highway Traffic Safety Administration for steering failures, but the investigation revealed the failures were driver error and had nothing to do with design.

We'll send you a quick email when a new Ford F Super Duty document is added.

Yes! I'd love to be emailed when a new, high quality document is available for my Ford F Super Duty. My email address is: