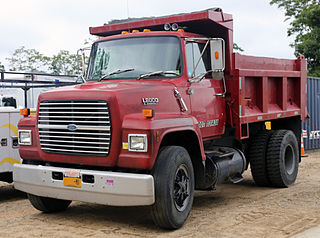 The Ford L Series trucks are a range of heavy-duty trucks that were built by Ford between 1970 and 1998. The first dedicated Class 8 truck produced by the company, the L-Series range replaced the N-Series short conventional (derived from the F-Series). The Louisville Line encompassed a wide range of models through the Class 7-8 GVWR ratings and for medium-duty, severe-service, and vocational applications; many were produced as semitractors. The line would become one of the most popular series of trucks Ford ever produced. The Aeromax L9000 was one of the most aerodynamic trucks in North America upon its introduction in 1988.The L-Series was produced in the Kentucky Truck Plant near Louisville, Kentucky, which eventually gave rise to the nickname "Ford Louisville Line" trucks. As a result of the 1996 sale of the Ford heavy-truck line to Freightliner, the L-Series/Aeromax ended production under the Ford brand, living on as the Sterling line of trucks that were produced until 2009.

We'll send you a quick email when a new Ford L Series document is added.

Yes! I'd love to be emailed when a new, high quality document is available for my Ford L Series. My email address is: