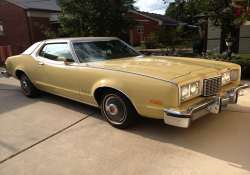 The Montego was introduced for 1968 as an upscale version of the intermediate Mercury Comet, which it eventually supplanted after 1969. It was essentially a twin of the Ford Torino. The Cyclone was a high performance variant of the Montego through 1971.The 1968 models were available in four body styles: four-door sedan, two-door hardtop, station wagon and convertible, in base and fancier MX trim.For 1970, the convertible was dropped, but new four-door hardtops and woodgrained MX Villager station wagon were added to the model selection. The 1970 and 1971 Montegos (and Cyclones) were notable for their striking forward-thrusting hood and grille centers. Concealed headlamps provided extra distinction for 1970 Broughams and Villagers. Montego sales through 1973 remained good, but were subsequently depressed by gas mileage concerns, and in-house competition from a restyled 1974 Cougar cast in the personal luxury mold and built on the Montego's platform with similar styling, and the more efficient Monarch introduced for 1975. For 1977, the Montego name was dropped, with Mercury's restyled intermediates all taking the Cougar name.Six-cylinder engines were offered in Montegos through 1973. V8 power—up to a massive 460 cubic inches from 1974 forward—was available throughout the entire run.

We'll send you a quick email when a new Ford Montego document is added.

Yes! I'd love to be emailed when a new, high quality document is available for my Ford Montego. My email address is: