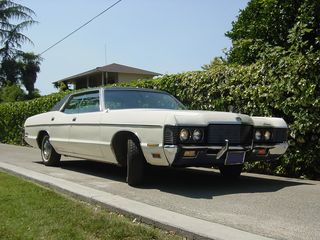 The Ford (Mercury) Monterey is a full-size car model that was introduced by Mercury in 1952. It would later share the same body style with the slightly more upscale Marquis, and the Park Lane and Montclair until the latter two were extinguished after the 1968 model year. The Marquis-Monterey body was built on a longer wheelbase and had a longer body than the Ford LTD, Ford Galaxie, and Ford Custom. During its production the Monterey served as the high-end, mid-range, and entry-level fullsize Mercury at various times throughout its run. It was the only Mercury to be in continuous production throughout the 1960s. After the 1974 model year, the Monterey was discontinued as Mercury streamlined its full-size offerings down to the Marquis nameplate. From 2004 to 2007, the nameplate was revived for a minivan, the counterpart of the Ford Freestar.

We'll send you a quick email when a new Ford Monterey document is added.

Yes! I'd love to be emailed when a new, high quality document is available for my Ford Monterey. My email address is: