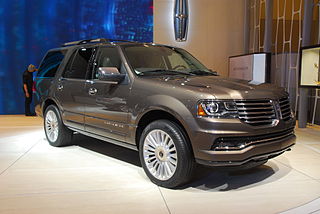 The Ford Lincoln Navigator is a full-size luxury SUV built by Lincoln. Introduced as a 1998 model, production began May 14, 1997 with sales beginning in August.The Navigator was Lincoln's first SUV as well as its first four-wheel drive capable vehicle. The Navigator shares its platform, mechanical features, and other equipment with the Ford Expedition, which was introduced a year earlier. Unique and upscale styling, interior materials, and other features differ the Navigator from the Expedition. Given its platform mate, the Navigator is the largest vehicle Lincoln currently offers, having the greatest cargo capacity and seating for seven to eight people, depending on the model. In 2007, a longer, extended wheelbase version of the Navigator called the Navigator L was introduced, increasing cargo capacity further. Since its introduction, Lincoln has offered only one engine choice at a time in the Navigator in any model year.In spite of a base manufacturer's suggested retail price of $40,000 in 1998,[clarification needed][dubious – discuss] the Navigator proved to be popular with nearly 44,000 sold in its first full year on the market. Competitors from General Motors like the Cadillac Escalade and the GMC Yukon Denali quickly followed to cash in on Lincoln's success with the Navigator. Much like the Cadillac Escalade would do, the Navigator found a niche with celebrities and the customized SUV scene.

We'll send you a quick email when a new Ford Navigator document is added.

Yes! I'd love to be emailed when a new, high quality document is available for my Ford Navigator. My email address is: