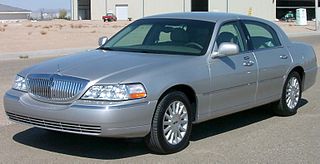 The Ford (Lincoln) Town Car is a full-size luxury sedan that was sold by Lincoln from the 1981 to the 2011 model years. Some units have been converted into a stretch limousine; it was the most commonly used limousine and chauffeured car in the United States and Canada.The Town Car nameplate for the 4-door sedan was first introduced in 1959 to the Lincoln Continental Mark IV, and then to Mark V lineup, each as a top-of-the-line luxury 4-door sedan. The nameplate became a permanent part of the Continental lineup again in 1969, and beyond that year with special editions of the brand denoting its highest-trim interior package. In 1981, the Town Car became a stand-alone model in the Lincoln product line, superseding the Continental as the flagship for the Lincoln brand as well as for Ford Motor Company.Its large dimensions made it the largest car in production in North America. From 1997 to 2003, the Town Car was the longest car (but not the heaviest) built in the Western Hemisphere, measuring nearly 18 feet (5.49 m) in length for a standard Town Car and 18.5 feet (5.64 m) for an L Edition.

We'll send you a quick email when a new Ford Town Car document is added.

Yes! I'd love to be emailed when a new, high quality document is available for my Ford Town Car. My email address is: