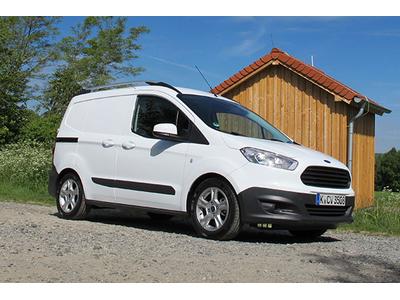 The Ford Transit Courier is a light commercial vehicle produced by Ford Motor Company since 2014; as with the rest of the Ford Transit range it is sold in passenger version as well, the Tourneo Courier leisure activity vehicle. Introduced at the 2013 Geneva Motor Show, the Transit Courier is sold primarily in Europe. The base engine for the Transit/Tourneo Courier is the 1.0L 3-cylinder EcoBoost engine producing 100hp. Alongside the gasoline engine are two diesels: A 1.5L Duratorq producing 75 hp and a 1.6L Duratorq producing 95 hp. On all three engines, Ford offers a start-stop system to reduce fuel consumption.

We'll send you a quick email when a new Ford Transit Courier document is added.

Yes! I'd love to be emailed when a new, high quality document is available for my Ford Transit Courier. My email address is: