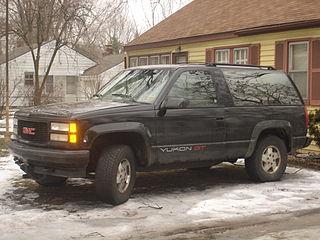 The GMC Yukon (and very similar Chevrolet Tahoe) are full-size SUVs from General Motors. Chevrolet and GMC sold two different-sized SUVs under their Blazer/Jimmy model names through the early 1990s. This situation changed when GMC rebadged the full-size Jimmy as the Yukon in 1992. Chevrolet waited until 1995 to rebadge the redesigned mid-size S-10 Blazer as the Blazer, renaming the full-size Blazer as the Tahoe. The name Tahoe refers to the rugged and scenic area surrounding Lake Tahoe in the western United States. The name Yukon refers to the Yukon territory of northern Canada. For the 1995 model year, the Tahoe and Yukon gained a new 4-door model slotting in size between the 2-door models and the longer wheelbase and higher passenger capacity Chevrolet Suburban and newly named Yukon XL.The Insurance Institute for Highway Safety has praised the Tahoe as one of the best of its class. The Tahoe is sold in North America, The Middle East (Except Israel), Republic of China (Taiwan), The Philippines, Chile, and Russia as a Left-hand vehicle. The Yukon and Yukon Denali is sold in United States, Canada, Mexico, Republic of China (Taiwan), and the Middle East (Except Israel) in LHD.

We'll send you a quick email when a new GMC Yukon XL document is added.

Yes! I'd love to be emailed when a new, high quality document is available for my GMC Yukon XL. My email address is: