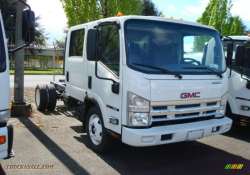 The GMC Terrain is a mid-size crossover SUV. According to GM, it replaced the Pontiac Torrent which was sold in the same dealerships prior to GM dropping the Pontiac brand. Like the Torrent, the Terrain is based on the Theta platform. The Terrain slots below the Acadia as GMC's smallest SUV. The Terrain shares engineering with the 2010 Chevrolet Equinox. While the two vehicles use the same platform and drivetrain, the Terrain's body panels and standard features differ from those of the Equinox.The 2010 Terrain debuted at the 2009 New York International Auto Show.

We'll send you a quick email when a new Honda Accord Wagon document is added.

Yes! I'd love to be emailed when a new, high quality document is available for my Honda Accord Wagon. My email address is: