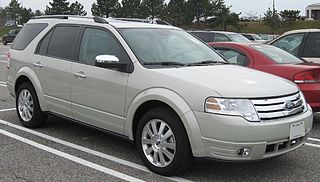 The Ford Freestyle and Ford Taurus X are crossover utility vehicles that were sold by Ford Motor Company from 2005 to 2009. Essentially the replacement for the Ford Taurus station wagon, the 2005-2007 Freestyle was produced in a single bodystyle with six or seven-passenger seating. As the Taurus made its return for 2008, the Freestyle was rebadged the Taurus X. The Taurus X ended production on February 27, 2009 and was marketed in the United States and Canada, as well as South Korea and the U.S. territories of Puerto Rico, U.S. Virgin Islands, and Guam.

We'll send you a quick email when a new Infiniti QX60 document is added.

Yes! I'd love to be emailed when a new, high quality document is available for my Infiniti QX60. My email address is: