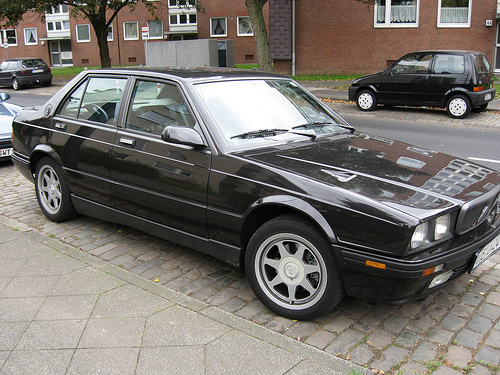 The Maserati Biturbo was a family of luxury sports cars, saloons and grand tourers produced by Maserati between 1981 and 1994. The original Biturbo was a two-door, four-seater notchback coupé. It was featuring, as the name implies, a two-litre V6 engine with two turbochargers and a luxurious interior. The first four-door Biturbo introduced was the 425 (1983?86), equipped with the "export" 2.5 litre engine. The 420 S sported improved handling, the twin intercooled engine and the same aesthetic accoutrements of the Biturbo S: dark finish trim, two-tone paint, two-tone wheels and NACA ducts on the bonnet, delivering fresh air to the intercoolers.

We'll send you a quick email when a new Maserati 420 document is added.

Yes! I'd love to be emailed when a new, high quality document is available for my Maserati 420. My email address is: