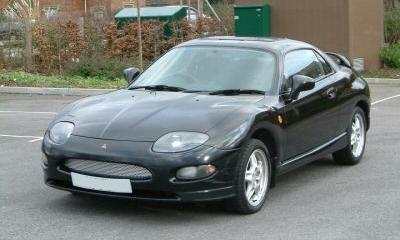 The Mitsubishi  FTO is a front engine, front-wheel drive coupe produced by Mitsubishi Motors between 1994 and 2000. It was originally planned to be exclusively for the Japanese domestic market, although its popularity as a grey market import to the United Kingdom, Ireland, and New Zealand led to eventual limited distribution through Mitsubishi's official dealers in those countries. Upon its debut it won the Car of the Year Japan award for 1994–95. In Japan, it was sold at a specific retail chain called Car Plaza. FTO stands for "Fresh Touring Origination”. The name recalls the Galant FTO coupé of 1971, one of the company's first sports cars. Prior to the arrival of the 1994 front-wheel drive FTO, which inherited the 'FTO' tag, was the Mitsubishi Galant Coupé FTO. A rear-wheel drive coupe produced by Japanese automaker Mitsubishi Motors from November 1971 to March 1975."FTO" was meant to stand for Fresco Turismo Omologato, in a fine example of Japanese Italian (or 'Fresh Touring Origination' in English). This compact Coupé FTO can effectively be seen as a replacement for the earlier Mitsubishi Colt 11-F Super Sports.

We'll send you a quick email when a new Mitsubishi FTO document is added.

Yes! I'd love to be emailed when a new, high quality document is available for my Mitsubishi FTO. My email address is: