Galant was a family car made by Mitsubishi during a production period that spanned over five decades. During this long run, it ended up with over 5 million sold units. It started out as a compact, but grew to be a mid-size car with time. The name Galant comes from the French word for chivalrous. During its nine generations and various iterations, this car truly lived up to that name. Although being a simple family car, it always offered more comfort, luxury and technological improvements than similar competitors. Galant buyers were getting both quality and great value for their money.

The Galant name first appears in 1969, as one of the iterations of Mitsubishi Colt. It was a compact car that used a traditional rear-wheel drive layout with a live axle spring rear suspension. A little later, this car served as the basis for a dynamic coupe, called Galant GTO. With a twin-camshaft engine and a limited-slip differential, it was very high-tech for those times. This all helped Galant to became the ancestor of a whole family of high-quality and prestigious cars, which subsequently won many victories in rally competitions and received several “Car of the Year” awards for high consumer qualities.

Among the distinctive features of the first Galant were the aerodynamic “wedge-shaped” body shape, which created an additional downforce, and the Saturn series engine with overhead camshaft and aluminum cylinder head. In general, mechanics have combined new and innovative technologies with simple and reliable solutions. By incorporating the best modern developments and technologies of that time, Galant became the ancestor of an entire segment of the automotive market in Japan. As a result, it soon debuted as an independent model, available in several body shapes. Besides a coupe and sedan variants, there was also a practical 5-door station wagon. 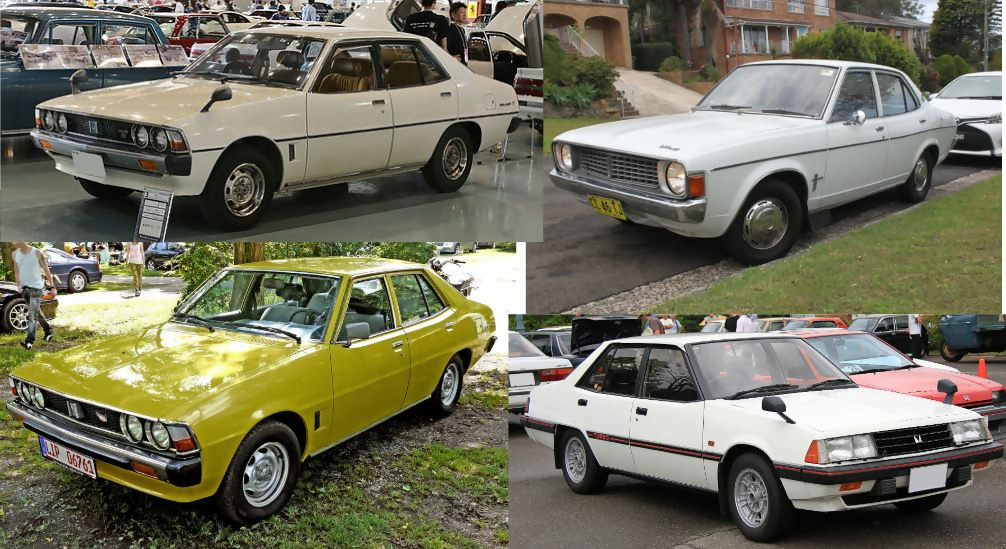 Following market and design trends of that time, new Galant came with a front-wheel-drive layout. This offered several advantages over the traditional setup. With all drivetrain components placed under the hood, there was more space in the cabin and the trunk. This meant that new Galant offered more room for passengers and luggage, despite having similar dimensions as the previous car. The exterior design was conservative, with no revolutionary or prominent features. Only body variants were a 4-door sedan or a hardtop. 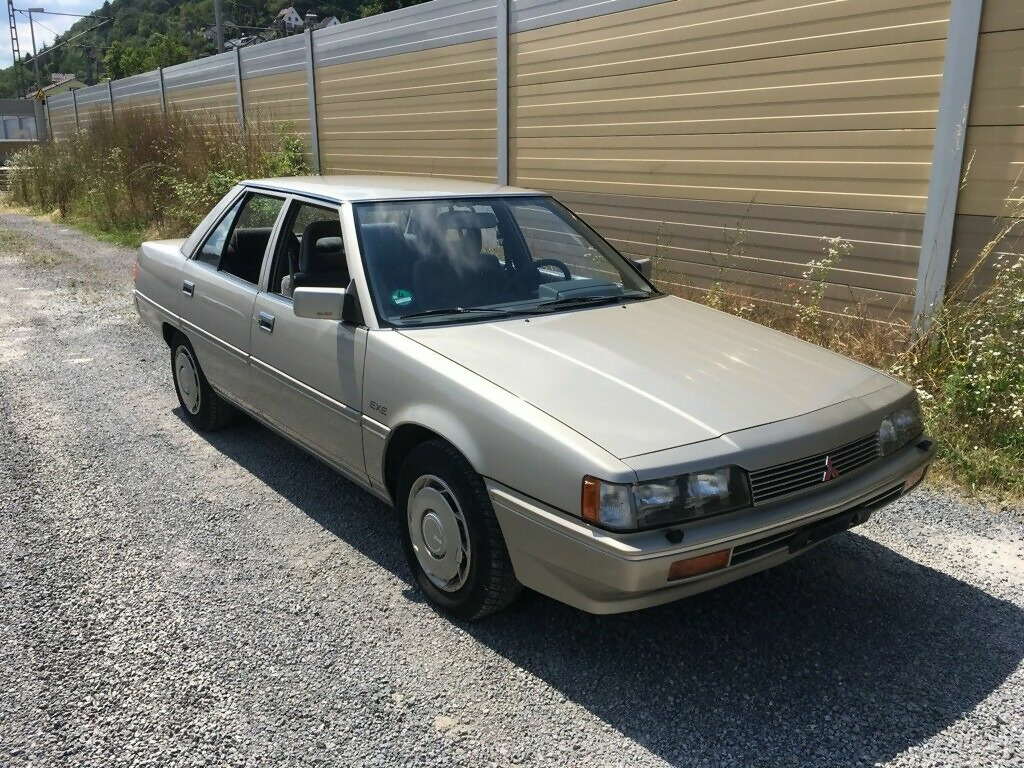 Yet, the situation was different inside the car and under the skin, with various comfort options that made it stand out in the crowd. Adjustable and comfortable front and back seats, stereo controls on steering wheel or cruise control are just some features that came as a standard. Also, there was electronically controlled suspension, which could alter both suspension firmness and ride height according to the road conditions. This gave a blend of ride and handling characteristics for a luxury car.

With a pair of V6 engines available, the engine range deviates from the usual four-cylinder lineup. Besides a classic automatic, some engines were available with a five-speed manual gearbox.

Following a success and good overall perception of the fifth generation, the new car kept the basic idea and made it better. Both exterior and interior of the car received major improvements. With rounder and sleek body lines and a more refined interior, current Galant was competitive with both Japanese and European counterparts. Newly added 5-door coupe helped increase practicality. 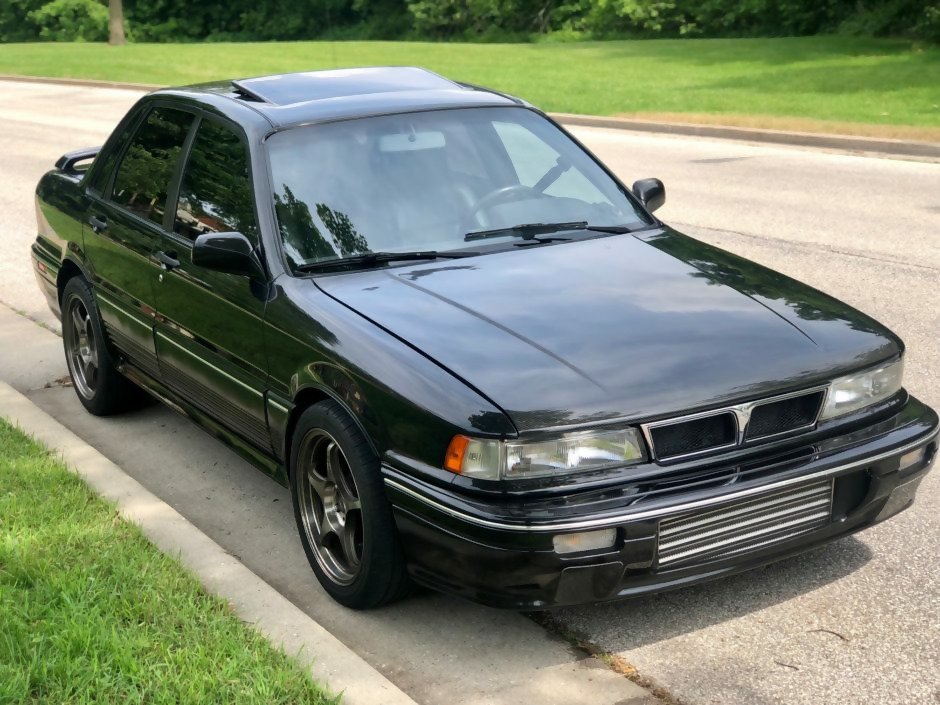 There were no major changes under the skin, either. Instead, all vital parts and systems have evolved. All available engine, although similar to ones used in the previous generation, received updates to meet emission demands. The only major difference is the absence of V6 units. With an optional adaptive air suspension, Galant pioneered the use of electronically controlled suspension systems in passenger cars.

However, the biggest news was several performance iterations. Mitsubishi, just like many other Japanese car manufacturers during the 80s, suffered from a lack of prestige and appeal. Despite proven reliability and good build quality, these cars weren’t among most desirable ones. At that time, buying a car from Japan was more rational decision than it was emotional. To improve the general marque perception, Mitsubishi introduced several performance models.

In their first attempt, Mitsubishi joined up with a reputable tuning company from Germany, called AMG. The result was a special model with more aggressive exterior, upgraded four-cylinder engine, better suspension and a luxurious interior. The second performance iteration started out as a necessity. When mentioning World Rally Championship or motor-sport, most people will remember the Lancer Evo, which made Mitsubishi popular in this segment. However, only few know that Galant was the first car used for this purpose. Strict regulations called for a production car with a turbocharged four-cylinder engine and permanent all-wheel-drive system. To comply, the sixth generation had a special road-going version named VR4, short for Viscous Realtime Four-Wheel-Drive. It also had front and rear independent suspension and high-tech four-wheel steering system. Despite winning several rally events in its racing trim, the Galant soon gave way to new Lancer Evo.

While the previous Galant was a capable performer, it had a styling that was a matter of taste. That changed with the new generation, as clunky body cladding and top-heavy look gave way to a more attractive design. Exterior styling is clean, with pinch grille and narrow headlights that carry on the family look of that time. Being functional and aerodynamic, the new design also helps fuel economy. Interior was much roomier than in previous generations, with increased overall dimensions and firm seats that offer plenty of adjustments. Improved dashboard layout, with more accessible stereo and heating controls, made it more ergonomic. 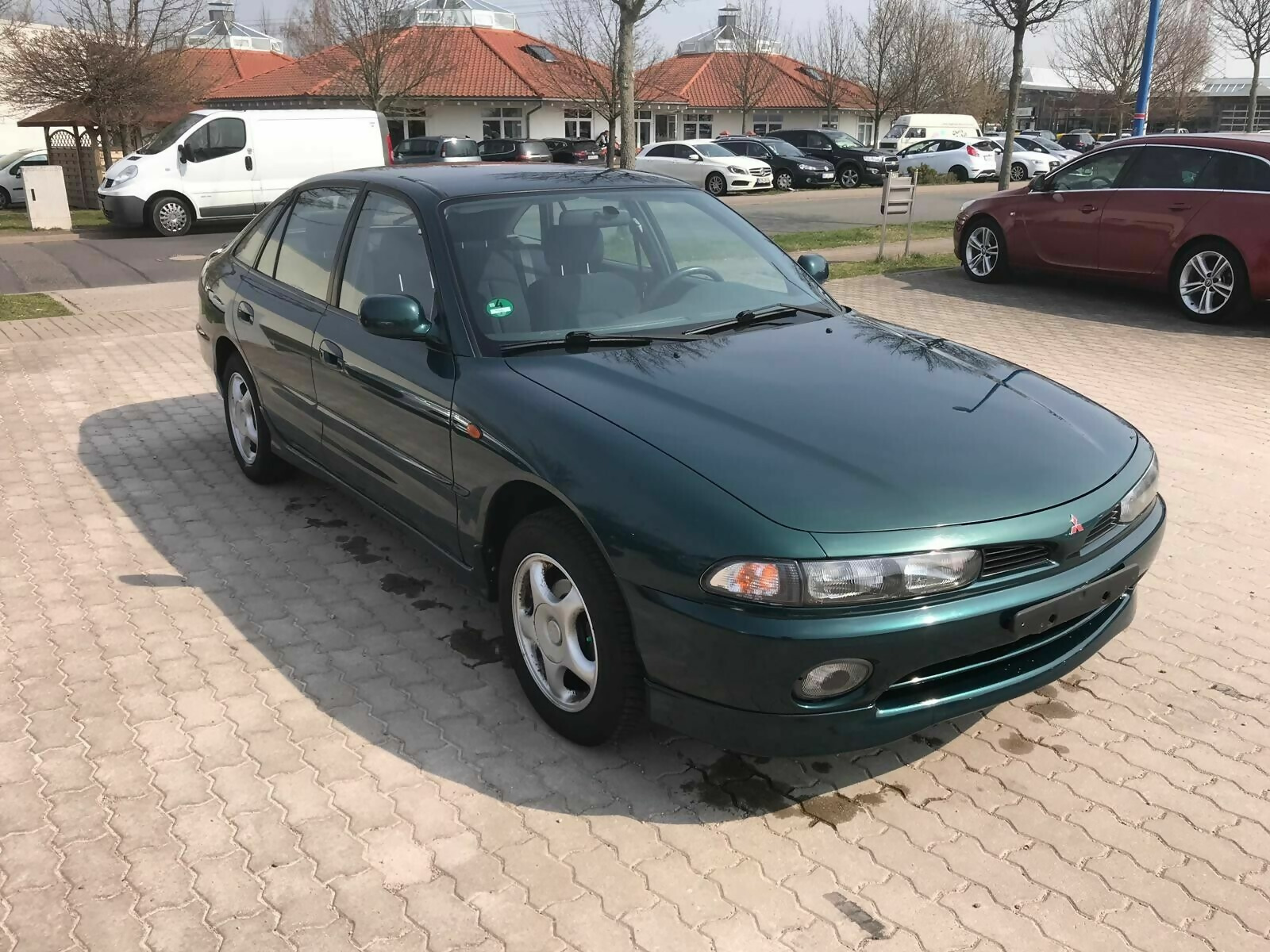 The engine range included several four-cylinder engines, a pair of V6 and one diesel engine. Besides a standard five-speed manual transmission, there was a four-speed auto called INVECS. This innovative gearbox used several sensors to monitor driving conditions to adapt the shift patterns to suit driving habits. Still, the most important upgrade was under the car. Once again, the Galant was on the cutting edge of new technologies, and this time it was the suspension. This was the first front-wheel-drive car to use a multi-link axles, both front and rear. This complex system is best for balancing ride comfort with road handling.

Buyers recognized the first VR4 as a very sporty, but also a subtle and practical car. To exploit this, Mitsubishi carried the name over to the new generation. Still, with no outside regulations and limitations, there were some changes that made it better. The most important was the V6 turbocharged engine. Having the same volume, it didn’t produce much more power, but it was smoother. To widen customer appeal, there was an optional 4-speed automatic transmission and various comfort features.

By the second half of the 90s, the Galant needed a major update to keep up with strong competition in mid-size market sedan. To accomplish this, it has grown a bit, got various interior upgrades and rich equipment. However, the most striking difference was the appearance, which was radically different from the previous car. Ageing looks, featuring the rounded and bubble-like shapes, gave way to a sharper and flat surfaces. The body has distinct edges of intersection, emphasizing silhouette dynamics. This is most noticeable at the front, where a low grille and wide headlights give it an aggressive understatement. Rapid change of generations of cars allowed to crystalize Mitsubishi’s own corporate identity. Unlike its predecessors, this generation did not have a hatchback body variant. Instead, a traditional 5-door station wagon reappeared. 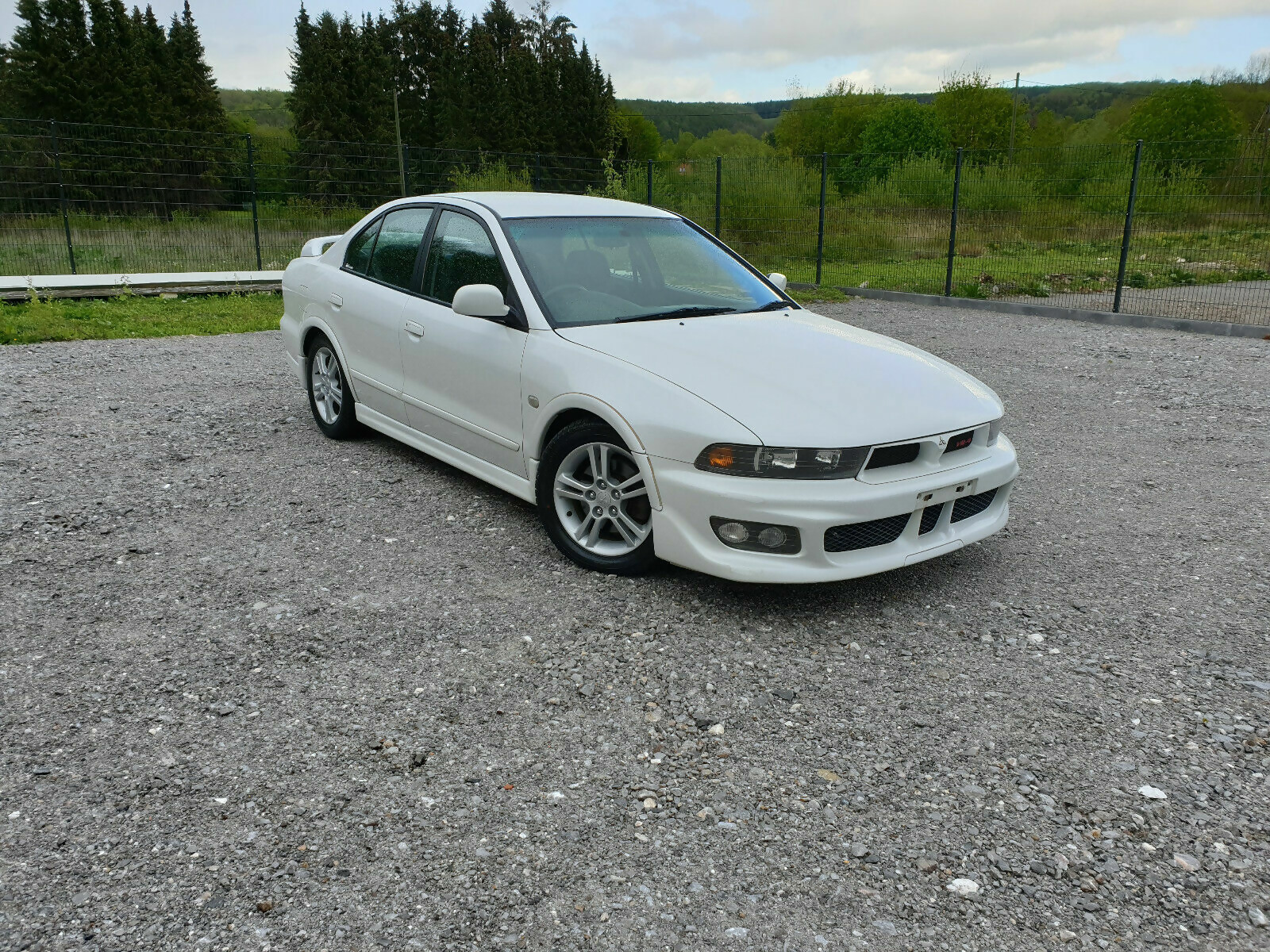 At first glance, the situation under the hood is not much different, with most engines being similar to ones in the previous generation. All but one, a four-cylinder engine with a GDI badge. This stands for Gasoline Direct Injection, and Galant was the first production car to use this technology. This system injects a high-pressurized fuel straightinto the combustion chamber, enabling better performance and an increased economy. Also, the second generation of INVECS  transmission, now based on Porsche’s Tiptronic, was a major upgrade in terms of performance and fuel economy.

In the end, true enthusiasts were thrilled to hear that VR4 was still available. With improved design, bigger engine and better handling, many consider these cars to be among ultimate sleepers, even today by today’s standards. After all, it is a high-performance machine hiding within the body of a plain ever-day car.

The last generation Galant was bigger, heavier and well equipped. With it, the focus was on luxury and comfort. Interior was a rich-looking and spacious, offering all technological amenities of the time. These included a touchscreen navigation system, hands-free phone system, top of the range stereo and heated power seats, among other things.  The supple suspension setup that soaked bumps gave the car a gliding road characteristic. 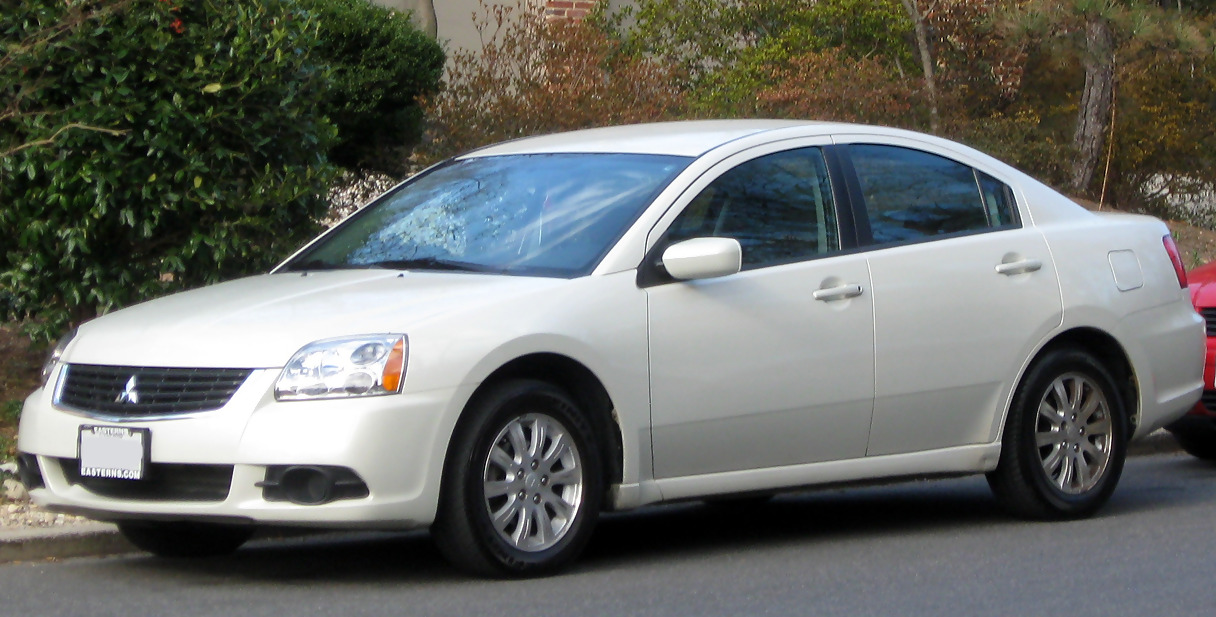 The luxury note continues with the outside design. A prominent front fascia features a bold mesh grille and clear-looking squared headlamps. Clean body lines with sharp edges are in line with design trends of that time. Details such as chrome trims, big wheels and lower ride height gave it a more upscale appearance.

The engine range was between a four-cylinder unit as a standard and a big V6 option. Using variable valve timing, called MIVEC, these engines were tuned for drivability instead of peak power. Two automatic gearboxes, with one of them offering a semi-automatic mode, were the only transmission options. As a result, the fuel economy was outstanding for such a large car, most notable when driving on highway speeds.

With luxury being a main theme, the sporty VR4 didn’t find its way to this generation. Instead, there was a special version, called Ralliart. With a stronger engine, stiffer suspension and design upgrades, it aimed at sporty-orientated driver.

We'll send you a quick email when a new Mitsubishi Galant document is added.

Yes! I'd love to be emailed when a new, high quality document is available for my Mitsubishi Galant. My email address is: