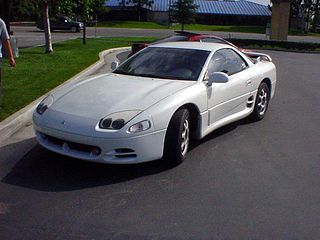 The Mitsubishi GTO is a sports car built by Japanese automaker Mitsubishi between 1990 and 2001. In most export markets it was rebadged as a Mitsubishi 3000GT. It was also imported and sold by Chrysler in North America as a Dodge Stealth captive import from the 1991 to 1996 model years with only minor detail/appearance differences; mechanically, the two cars were identical. The Mitsubishi GTO, or Mitsubishi 3000GT, and Dodge Stealth design was the result of the collaborative effort between Chrysler and its Japanese partner, Mitsubishi Motors. The Japanese model took its name from the Galant GTO, a two-door hardtop coupé sold by the company in the early 1970s, which in turn got its name from the Ferrari GTO, which means Gran Turismo Omologato (grand touring, homologated). In Japan, it was sold at a specific retail chain called Car Plaza.

We'll send you a quick email when a new Mitsubishi GTO document is added.

Yes! I'd love to be emailed when a new, high quality document is available for my Mitsubishi GTO. My email address is: