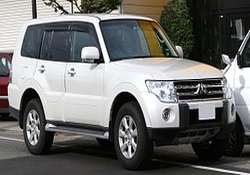 The Mitsubishi Shogun is UK market nameplate for Mitsubishi Pajero, a sport utility vehicle manufactured by Mitsubishi. It was named after Leopardus pajeros, the Pampas cat, which is native to the Patagonia plateau region of southern Argentina.But pajero in Latin-American Spanish is also a common term of abuse, usually translated as "wanker" or "tosser", thus perhaps why alternative names have been used for many markets. It is known as the Mitsubishi Montero (meaning "mountain hunter" in the Americas (except Brazil), Spain, and India.In Japan, the Pajero was sold at a specific retail chain called "Car Plaza". Discontinued in the United States in 2006, the vehicle continues to be sold in the rest of the world in its fourth-generation iteration.Thanks to their success, the Pajero, Montero and Shogun names were also applied to other, mechanically- unrelated models, such as the Pajero Mini kei car, the Pajero Junior and Pajero iO/Pinin mini SUVs, and the Mitsubishi Pajero/Montero/Shogun Sport. Main rivals are the Land Rover Discovery, Toyota Land Cruiser Prado SWB/LWB and Nissan Patrol Y61.

We'll send you a quick email when a new Mitsubishi Shogun document is added.

Yes! I'd love to be emailed when a new, high quality document is available for my Mitsubishi Shogun. My email address is: