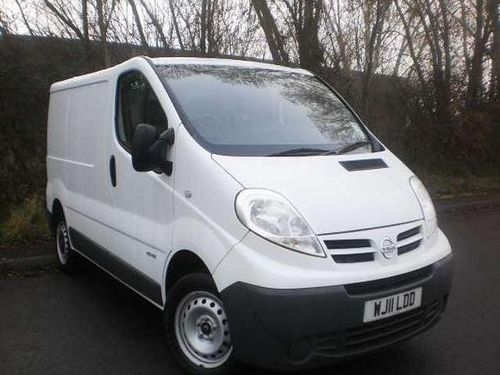 The Nissan Primastar, a commercial light van, introduced in the market in 2001 by Nissan, is a badge-engineered version of second generation Renault Trafic. The original Renault Trafic was sold from 1980 to 2000 and was somewhat revised andupdated during its lifetime. Originally the van had some variations in the front end shape depending which engine was fitted, with the original 1397cc motor fitting behind a flat grille, and the diesel engine and larger 1647cc petrol engines requiring an extended plastic grille and deeper bumper. The 1721cc OHC engine replaced the 1647cc OHV in the mid 1980s, which fitted under the shorter grille but required a small lump in the bonnet. The diesel and 2.1 petrol carried on with the extended grille. In 1990 the Trafic underwent a major front end facelift with rounder shape and a plastic bumper, the new longer body shape covering all varieties of engine. In 1995 the Mk1 Trafic got its final facelift, with new grille, new tail lights, large double rear view mirrors and a new interior with modern dashboard and multi-adjustable seats. This version was also sold as the Opel Arena from 1997. The Primaster was available as a panel van, combi, bus or chassis cab.

We'll send you a quick email when a new Nissan Primastar document is added.

Yes! I'd love to be emailed when a new, high quality document is available for my Nissan Primastar. My email address is: