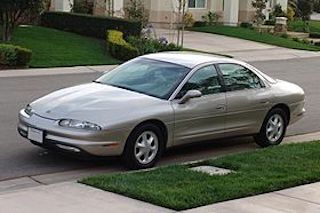 The Oldsmobile Aurora is made by Oldsmobile between 1994 and 2003 and is a full-size luxury sports sedan The Aurora rides on the same Cadillac-derived G platform as the two-door Buick Riviera.

The Aurora became the high-end sport sedan offered by Oldsmobile, powered by a four-cam, 32-valve 4.0 L V8 supplanting the Oldsmobile Toronado coupe and eventually the Oldsmobile 98, in the lineup. The Aurora offered both a V8- and a V6-powered version in 2001 and 2002 but returned to being V8-only in 2003. The Oldsmobile Aurora was offered with a four-speed automatic transmission with performance algorithm shifting. No manual transmission was ever offered on the Aurora.

We'll send you a quick email when a new Oldsmobile Aurora document is added.

Yes! I'd love to be emailed when a new, high quality document is available for my Oldsmobile Aurora. My email address is: