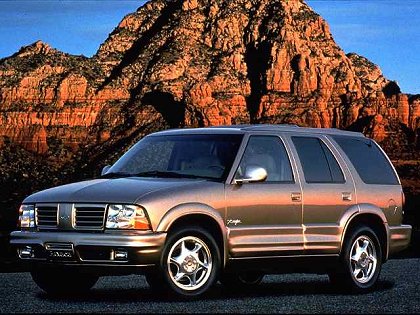 The name Oldsmobile Bravada is used to designate two different models, the first one (1991-2001) based on GMT330 and the second one (1996-2004) based on GMT360 . The Bravada GMT 330 was launched in 1991 and was the first truck-based vehicle offered by Oldsmobile since the 1920 s, and by that time was a United States-only vehicle. The Bravada was refreshed later than its platform mates, with no 1995 models produced. The 1996 and 1997 models' body featured more rounded lines than their predecessor. This generation Bravada could easily be distinguished from the Chevrolet Blazer and GMC Jimmy by its Oldsmobile-styled body-colored split grille, premium alloy wheels, and lower bodyside cladding

We'll send you a quick email when a new Oldsmobile Bravada document is added.

Yes! I'd love to be emailed when a new, high quality document is available for my Oldsmobile Bravada. My email address is: