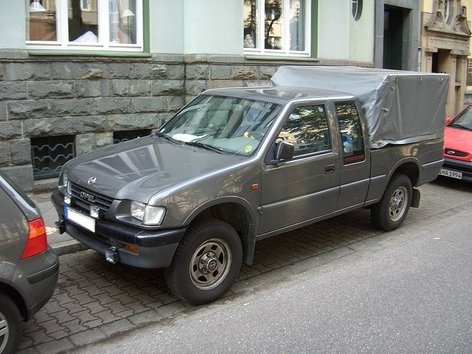 Based on Isuzu Faster TF, the Opel Campo is a pickup truck which was released in the market in 1992. It was available in three versions: a two-door car with two seats, a twodoor car with two seats and a second-row auxiliary seats and a four-door car with a full second seat. It received a facelift in 1997. In Japan, two-wheel drive versions were called "Isuzu Faster", with the "Rodeo" name reserved for four-wheel drive units. In 1992, anupdated version of the 4JB1 2.8 litre turbodiesel with direct injection was introduced; while the original 2.8 had has 100 PS (74 kW), the direct-injected version offered 110 PS (81 kW).

We'll send you a quick email when a new Opel Campo document is added.

Yes! I'd love to be emailed when a new, high quality document is available for my Opel Campo. My email address is: