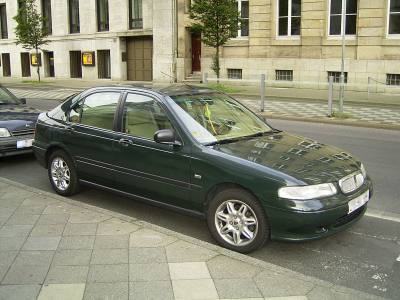 The Rover 400 is a compact car mutually developed by British automaker Rover Group and Japanese Automaker Honda. Based on Honda Concerto, it was introduced in 1990 . Two generations of Rover 40 0 has been produced so far, the R8 (1990-1995) and the HH-R (1995-1999). The Rover 400 was marketed as a small family car, and it was almost the same in size and engine range with modern-day models such as the Ford Escort and Opel Astra. During the late 1990s, replacements for the Rover 25 and 45 models were developed by Rover Group under the codename R30. Intended for launch in 2003 as the Rover 35 and 55, these would have been based on an all-new platform. At launch these would have used K-series engines, but new Valvetronic engines were anticipated to be introduced by 2006. The R30 project was cancelled when BMW divested its ownership of Rover Group in 2000. It is possible that some of the development work may eventually have benefitted the BMW 1 Series.

We'll send you a quick email when a new Rover 400 document is added.

Yes! I'd love to be emailed when a new, high quality document is available for my Rover 400. My email address is: