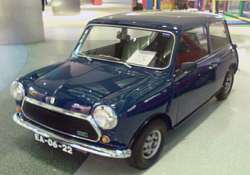 The Rover Mini was a version of Mini produced by Rover.On introduction in August 1959 the Mini was marketed under the Austin and Morris names, as the Austin Seven and Morris Mini-Minor.The Austin Seven was renamed Austin Mini in January 1962 and Mini became a marque in its own right in 1969. In 1980 it once again became the Austin Mini and in 1988 the Rover Mini. BMW acquired the Rover Group (formerly British Leyland) in 1994, and sold the greater part of it in 2000, but retained the rights to build cars using the MINI name.

We'll send you a quick email when a new Rover Mini document is added.

Yes! I'd love to be emailed when a new, high quality document is available for my Rover Mini. My email address is: