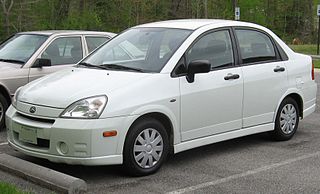 The Suzuki Aerio (called the Liana in China, Europe, Israel, South Asia, Taiwan and Australia) is a compact car that was built by Suzuki Motor Corporation. It was introduced in 2001 as a replacement for the Suzuki Esteem/Baleno, with a tall 5-door SX model hatchback (for maximum inner room efficiency) and a 4-door sedan body. It featured two different 16-valve gasoline straight-4 engines, with 1.5 L and 1.8 L, this one capable of 125 PS (92 kW; 123 hp) JIS. Production was discontinued in 2007 around the world and replaced by the Suzuki SX4, except in China where it is built by Changhe-Suzuki. The Liana remained in production in Pakistan in 1.3L and 1.6L variants until 2012.

We'll send you a quick email when a new Suzuki Aerio document is added.

Yes! I'd love to be emailed when a new, high quality document is available for my Suzuki Aerio. My email address is: