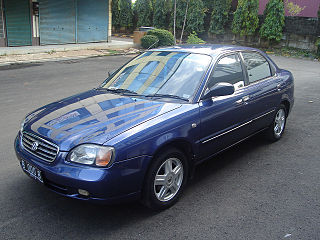 The Suzuki Cultus Crescent is a compact car that was produced by Suzuki in Japan between 1995 and 2002, with South Asian production continuing until 2007. The Cultus Crescent was sold as such in Japan until May 1998, when it was renamed Suzuki Cultus due to the sales discontinuation of the previous Cultus in the Japanese market. The Cultus Crescent was also marketed as the Suzuki Esteem in North America, and as the Suzuki Baleno throughout Asia, Australasia, and Europe. In India where it was manufactured by Maruti Suzuki, the Cultus Crescent was sold as the Maruti Baleno. In the Philippines, it was marketed as the Chevrolet Cassia. The Cultus Crescent was replaced in most markets by the new Aerio/Liana, which was launched in 2001.In Japan, the sedan was discontinued in November 2001, although the wagon remained until August 2002.The entire range was pulled from the market in Europe and North American in 2002, after one year of overlapping with the Aerio/Liana. The car remained available in many developing countries, including India and Southeast Asia, where it was sold until 2007, when production stopped at the Maruti factory, with the assembly line giving way to the SX4 sedan.

We'll send you a quick email when a new Suzuki Cultus Crescent document is added.

Yes! I'd love to be emailed when a new, high quality document is available for my Suzuki Cultus Crescent. My email address is: