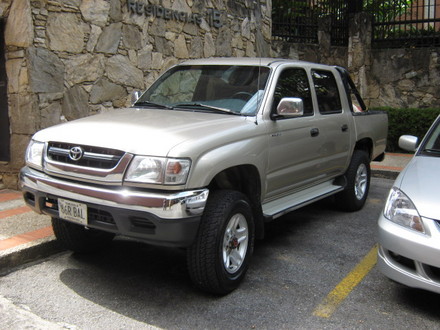 Toyota Hilux was first manufactured in around 1968. It is a series of compact pickup trucks. This truck has gained a reputation for its exceptional reliability and sturdiness even during heavy use, and in fact it is often referred to as the Indestructible Truck. As of 20 14, Hilux is available worldwide except in Unites States, Japan, North and South Korea, and Canada. In October 2007, the Swedish auto magazine Teknikens Värld performed an evasive manoeuvre (a moose test) that revealed that the manoeuvrability of Hilux pickup truck was deficient for turning sharply at moderate speeds. The truck failed the test and only the driver's skill prevented it from overturning. After the test Toyota stopped the sales of Hilux equipped with 16" wheels in Europe.

We'll send you a quick email when a new Toyota Hilux document is added.

Yes! I'd love to be emailed when a new, high quality document is available for my Toyota Hilux. My email address is: