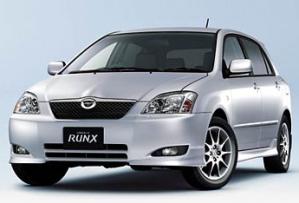 The Toyota Runx, officially referred to as the Toyota Corolla Runx has a 5 door hatchback body style with a front positioned engine driving through the front wheels.Its 4 cylinder, double overhead camshaft naturally aspirated engine has 4 valves per cylinder and a volume of 1.5 litres. For this model it musters power and torque figures of 107 bhp (108 PS/80 kW) at 6000 rpm and 141 Nm (104 lbft/14.4 kgm) at 4200 rpm respectively.Power is delivered to the wheels through a 4 speed automatic gearbox.Quoted kerb weight is 1080 kg. In Japan, the Corolla has always been exclusive to Japanese retail sales chain called Toyota Corolla Store, which was previously established in 1961, called Toyota Public Store, selling the Toyota Publica. A badge engineered version called the Sprinter was introduced around the same time as the Corolla in Japan, and sold at a different Toyota Japan dealership sales channel called in 1966 Toyota Auto Store.

We'll send you a quick email when a new Toyota Runx document is added.

Yes! I'd love to be emailed when a new, high quality document is available for my Toyota Runx. My email address is: