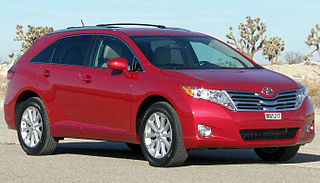 The Toyota Venza is a front-engine, front- or all wheel-drive mid-size five-passenger crossover SUV manufactured and marketed by Toyota, unveiled at the 2008 North American International Auto Show in Detroit.Based on the Toyota FT-SX concept car unveiled at the 2005 North American International Auto Show, the Venza was primarily engineered at Toyota Technical Center in Ann Arbor, Michigan, and designed at the Calty Design studios in Newport Beach, California.Venza production began at Toyota Motor Manufacturing Kentucky (TMMK) in Georgetown, Kentucky, in November, 2008.Production of US models ended in June 2015, and export models are scheduled to end in 2017.The name 'Venza' is a portmanteau of Venture and Monza.

We'll send you a quick email when a new Toyota Venza document is added.

Yes! I'd love to be emailed when a new, high quality document is available for my Toyota Venza. My email address is: